His advantage was being eroded late on, but Golden Pal was ultimately well on top at the line, with Cowan a fast-finishing second.Nigel Tinkler’s Flying Childers winner Ubettabelieveit fared best of the European raiding party in third after blowing the start.Ward said: “He’s just amazing. I got a little worried on the backside when Irad took a hold of him as he lost a little momentum, but then he just accelerated down the lane and he’s a champion colt.- Advertisement – – Advertisement – “When he showed a bit of acceleration passing the quarter-pole I knew we were OK, although I got a little worried in the last part. I was hugging my son, but we got there!“Royal Ascot here we come – we’re going to get it this year!”Winning owner-breeder Randy Lowe was a proud man – and outlined big plans for next year.He said: “I bred him out of my mare Lady Shipman and right from the moment he was born and put his chin in the palm of my hand I knew he was going to be special.“Winning a race at the Breeders’ Cup has been my ambition for 35 years so this is one of the greatest days of my life.“I named him Golden Pal after my mentor John C Mabee, whose best horse was Best Pal.“Regarding Wesley, he has chased me for a few years to send him one and because he liked this horse so much, I thought let’s let him have a try.”He added: “In the race Irad tried to pull him back because we’d spent a lot of time teaching to rate, but then he let out a notch (of rein) and he was in control.“Owing to the Covid restrictions we were unable to go to Royal Ascot to see him run, so we threw a breakfast party in the Red Rock Casino in Las Vegas. I remember as we watched the race develop I couldn’t believe it when he got caught.“I think the plan will be to rest him and then bring him back here at Keeneland in early April, but the big plans are the King’s Stand Stakes, the Nunthorpe and the Breeders’ Cup again next year.”Tinkler was delighted with the performance of Ubettabelieveit, saying: “We put ear plugs on him so he wouldn’t hear the bell so loud and obviously he fell out of the stalls, but it probably helped him in some ways because he got a good run through.“We’re obviously delighted with him and I thought the jockey (Rowan Scott) gave him a great ride.“He probably didn’t quite get the trip – he’s a five-furlong horse, it was five-and-a-half today and in the last 50 yards he just got a little bit tired, but we’re very pleased.“We know he’s a very good horse and we’re fortunate to have him. We’ll look forward to next season and he’ll have a good break now.”Hollie Doyle was out of the places on the Archie Watson-trained Mighty Gurkha, on what was her first Breeders’ Cup ride.She said: “He jumped well, but we hit a flat spot and lost our position and then he couldn’t quicken in the straight. It’s been a great experience and I’ve loved every minute here.” With Irad Ortiz Jr in the saddle, Golden Pal was the red-hot favourite to provide trainer Wesley Ward with back-to-back in the Grade Two contest following the victory of Four Wheel Drive 12 months ago – and the result was scarcely in doubt.Ward’s charge made a rapid start from his wide berth, enabling him to cross the field and take an early lead.Ortiz Jr briefly took his mount back, before giving him his head before the home turn and he quickly put clear daylight between himself and his rivals.- Advertisement – 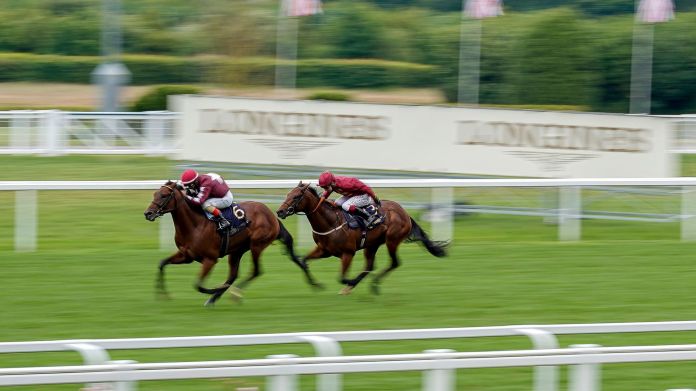 Royal Ascot runner-up Golden Pal dominated from the front in the Breeders’ Cup Juvenile Turf Sprint at Keeneland.Mowed down late by Michael Bell’s The Lir Jet in the Norfolk Stakes in June, the Uncle Mo colt had since blitzed his rivals in a stakes race at Saratoga after connections abandoned plans to return to Britain for a tilt at the Nunthorpe at York.- Advertisement –